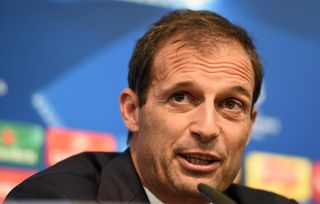 Juventus boss Massimiliano Allegri insists Saturday’s showdown with Inter Milan will be a “great match” despite his side having wrapped up their eighth successive Serie A title last weekend.

With five games left to play in the league, Juventus travel to third-placed Inter for the ‘Derby d’Italia’.

Juve no longer have to worry about being caught at the top of the table, but that does not mean Allegri is willing to accept a tepid end to the campaign.

“It will be a great match and we have to go there and get a result, because our goal from here until the end of the season is to continue picking up points.”

A #W8NDERFUL 🎭 training session as we conduct our dress rehearsal for the Derby d'Italia! 🇮🇹 #ForzaJuvepic.twitter.com/LW6cIvA3cJ— JuventusFC (@juventusfcen) April 25, 2019

Allegri has few injury concerns ahead of the trip to Milan, and will have Giorgio Chiellini back in contention. Rodrigo Bentancur, however, has a muscle problem and remains unavailable.

On his aims for the remaining fixtures, Allegri added: “I want to try two things before the season is over but not tomorrow night.

“First: Playing Federico Bernardeschi and Joao Cancelo in the box-to-box midfielder roles and second: Trying Emre Can there, who has already proven he can play in a midfield three.”

With the Scudetto safely wrapped up for another season, the Juve boss has also been looking ahead to the future and how the Italian giants – who were knocked out of the Champions League at the quarter-final stage – can improve.

He said: “At the end of the season we have to begin planning how we can continue to grow.

“Juventus have been established as amongst the best eight in Europe in the last few years.

“We will analyse the season in the best way possible so we can create the prerequisites for another winning year.”

Inter go into the match sitting in third spot on 61 points, six behind Napoli in second and five ahead of city rivals AC and Atalanta below them.

Boss Luciano Spalletti said on inter.it: “We’ve still got important results to pick up, there isn’t a lot between the sides in our league.

“We still need results because the teams behind us could win all their games.”

The whole squad is available for Spalletti, who said they had all trained well ahead of the game.

Spaletti was also full of praise for his team’s recent displays, adding: “We always try to implement our idea of football, both my idea and the idea of the players.

“In the recent matches we’ve played, the team have produced excellent performances both home and away without exception.”