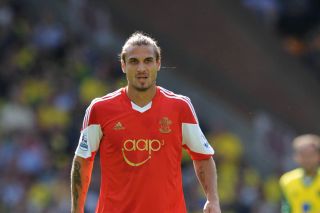 Italy international Osvaldo moved to the Premier League from Roma in the close-season, but is currently suspended by Southampton after a training-ground altercation - reportedly with defender Jose Fonte.

Osvaldo has subsequently been linked with a return to Serie A, where he scored 28 goals in 57 games for the capital club before his £15 million exit.

Although Marotta confirmed an interest in the Argentine-born forward, he conceded Juve will have to sell players before bringing in fresh faces.

One player linked with a departure is Mirko Vucinic, who Juve had originally hoped to use as a makeweight in a deal to sign Inter's midfielder Fredy Guarin.

The Montenegro striker is also a reported target of Arsenal and Marotta confirmed that he will be allowed to leave if he desires.

"He is an excellent player, but before buying anyone we need to sell.

"Vucinic? He will leave only if he asks to go."

Marotta was also confident that Juve coach Antonio Conte will soon renew his deal in Turin.

The 44-year-old has led Juventus to two consecutive Serie A titles, as well as the league summit this season, where they are currently six points clear of Roma.

He added: "Antonio Conte will soon renew his contract, there will be no problems with Andrea Agnelli.

"He can become our Alex Ferguson, even if in Italy a coach isn't quite a manager in the same way."