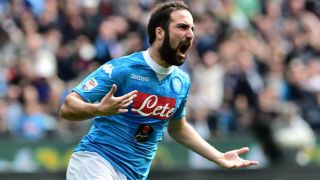 The Turin club have been heavily linked with a move for the Argentina international but Napoli have been consistent in their stance that they would not sell.

Marotta met with Napoli president Aurelio De Laurentiis at the first Lega Calcio meeting of the season on Monday after which he admitted defeat in his pursuit of the former Real Madrid striker.

"For now the Higuain matter is closed. I can confirm that we will not pay the clause," he told reporters.

"No club has offered €94million up to now, it's just trash press reports that hurt football fans.

"Juventus are very intelligent and they understand that they cannot do this. They know perfectly well that it is a lost battle."

Higuain's brother and agent Nicolas said last month that his client would not be renewing his contract with last season's Serie A runners-up, which has two years left to run.

The club, however, have been adamant that little has changed regarding the 28-year-old striker, who scored 36 league goals in 2015-16.

"Gonzalo never said he wanted to leave," Napoli's head of communications Nicola Lombardo said at a question-and-answer session with supporters at the club's training base in Dimaro.

"He will be here in Dimaro to start pre-season on July 25."