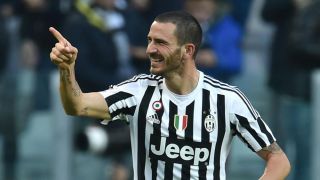 Juventus defender Leonardo Bonucci has called on his side to remain focused on their Serie A defence despite beating Lazio 1-0 on Wednesday to advance to the semi-finals of the Coppa Italia.

Former Lazio star Stephan Lichtsteiner scored the only goal of the match to set up a two-legged tie against Inter, while Juve also have a Champions League clash against Bayern Munich coming up.

But despite Juve extending their winning run to 11 domestic matches, Bonucci said the team must focus on catching Serie A leaders Napoli.

"It'll be a wonderful challenge to take on Inter in the semi-finals, but right now we have to focus on Serie A," he told Rai Sport.

"Napoli are two points away and will cause us real problems, but we are there and want to fight to the end."

Juventus players must "spit blood" every time they step on to the pitch, Bonucci added.

He said: "Juventus have to win always, we must spit blood every time we step on to the pitch.

"In order to push to the end in all three tournaments, we need everyone to contribute. We faced a good Lazio, but we put our character on to the pitch and played our game.

"It could've ended with a bigger scoreline, but the important thing was to win."