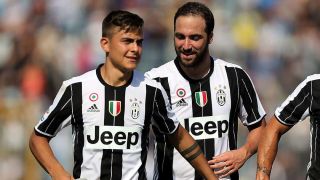 Gonzalo Higuain and Paulo Dybala will feature in Juventus' final Serie A contest of the season at Bologna, but Gianluigi Buffon and Giorgio Chiellini are rested with the Champions League final against Real Madrid on the horizon.

Juve completed the second part of what they hope will be a treble by beating Crotone to retain the Scudetto last week, having already won the Coppa Italia.

Massimiliano Allegri has resisted the temptation to rest his star strikers, though, with Higuain, Dybala and Mario Mandzukic all set to start versus Bologna.

However, the head coach has decided that Buffon and Chiellini will not play ahead of the Cardiff showpiece against Madrid on June 3.

"We will look to end the Serie A season on a high by winning against Bologna, then we will think about the Champions League final," Allegri said at a media conference.

"Higuain, Dybala, Mario Mandzukic and Juan Cuadrado will line up in attack on Saturday.

"Emil Audero will be our goalkeeper.

"Chiellini will not feature, but Sami Khedira will be back in midfield."