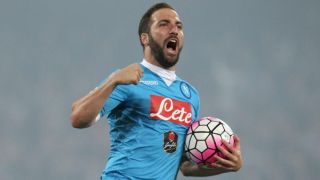 Juventus have completed the signing of Gonzalo Higuain from Napoli for a fee of €90million, Lega Serie A has confirmed.

The striker has signed a four-year deal with the Serie A champions, reportedly worth €7.5m a season, after passing a medical.

Juve are set to pay two instalments of €45m over the next two years to match the striker's release clause, making the deal the third most expensive in world football, after Cristiano Ronaldo's €94m switch to Real Madrid from Manchester United in 2009 and Gareth Bale's €100m move to the Spanish club three years later.

Juventus were desperate to sign a new striker following Alvaro Morata's return to Real Madrid and they have now landed their prime target in last season's Serie A top scorer.

The 28-year-old enjoyed a stellar 2015-16 campaign, netting 36 goals in 35 Serie A appearances to help Napoli to second place in the Serie A table.

Juve boss Massimiliano Allegri said on Tuesday that he was not concerned by the staggering sums of money involved.

"I am not the one who decides how much someone costs," he said following his side's 2-1 International Champions Cup win over Tottenham.

"The market decides transfer fees. Some players might be worth more, others less. But that's the law of the market. It's not restricted to football."

Higuain becomes Juventus' fifth signing of the close season after the captures of Miralem Pjanic, Marko Pjaca, Medhi Benatia and Dani Alves in moves set to be funded by the sale of star midfielder Paul Pogba.

Napoli are reportedly in talks with Inter over the prospect of signing Mauro Icardi as Higuain's replacement.