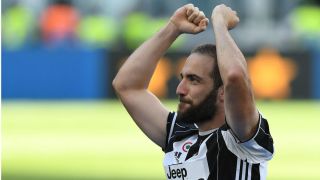 Gonzalo Higuain could be the deciding factor in the Champions League final between Juventus and Real Madrid, according to Alessio Tacchinardi.

Tacchinardi spent 13 years at the Turin club in total, and he believes that Juve have the quality in the likes of ex-Madrid man Higuain and veteran goalkeeper Gianluigi Buffon to claim their first Champions League title since 1996.

"I'm betting on Higuain," he told Spanish publication AS.

"I see all the desire that he and Juventus have to take the throne from the champions of Europe. They have reached the final in great shape.

"It's a game between two super sides that deserve praise, no matter what. I hope Juve win, but honestly both sides deserve to take the title.

"It will be an even match. In Italy there is great excitement about Juve, but I hope the Bianconeri will not underestimate the strength of this Madrid."

Buffon has been touted as a possible winner of the 2017 Ballon d'Or, with Madrid star Cristiano Ronaldo another favourite to claim the prestigious award for a second successive year.

Buffon against Ronaldo could well prove another decisive contest at Cardiff's Principality Stadium on June 3, and Tacchinardi is confident that Juve's 39-year-old goalkeeper will prove his quality once again.

"Obviously I can only say Buffon," Tacchinardi said in regards to his preferred Ballon d'Or winner.

"Cristiano is an example for his dedication and his desire to improve always, he is never satisfied despite so many successes.

"But Gigi deserves it for his history and for everything that he has done. Besides, Cristiano already won many times."