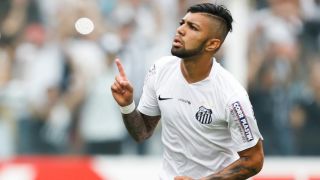 Juventus and Barcelona target Gabriel Barbosa expects a transfer away from Santos to be confirmed shortly.

The Brazilian club said this week they had accepted a €20million bid from the Serie A champions for the 19-year-old forward, though Barca retain first refusal on any transfer.

Reports in Spain on Thursday claimed that Barca technical director Robert Fernandez was due to fly out to South America in order to negotiate a deal for the highly-rated forward, who is currently with the Brazil squad ahead of the start of the Olympic Games.

Gabriel himself says he is now very close to finalising a move away from the Campeonato Brasileiro, though he would not confirm his destination.

"I am not signed yet, I am a Santos and Brazil player," he said at a media conference on Thursday. "I am very happy to represent Santos here. Soon, things are going to be sorted.

"Our focus is only here. Before we came, I was in negotiations, and starting from then I left it with my father and my representatives. I think that soon a decision is going to be taken."

Barca established their first refusal option for Gabriel as part of the deal to take Neymar to Camp Nou in 2013.

The forward, nicknamed 'Gabigol', admits he is looking forward to the prospect of playing alongside his former team-mate when the Rio 2016 football tournament gets underway next week.

"I played with him on my debut. It was a farewell after a short time," he said.

"It's very good to play with him. He's a star, you don't need to say anything else. Playing with him is easy."