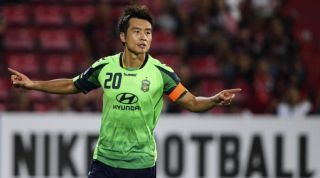 This season has not gone to plan for Cho Min-kook's side, though, and they currently sit seventh in the table, in the relegation group.

With just three matches of the regular season remaining, Ulsan are three points adrift of the championship group and defeat at Jeonbuk could prove costly.

Ulsan will enter the match in poor form, also, winless in four matches, while a home match on Thursday ended in a disappointing 3-0 defeat to Seoul.

Victory against Jeonbuk seems unlikely given the leaders' unbeaten run of seven matches and they possess two of the league's top six scorers.

Lee Dong-gook leads all scorers with 13 goals, while Han Kyo-won has also chipped in with nine.

If Jeonbuk - who top the standings by five points - slip up, the second-placed Suwon Bluewings will have to convert.

They are unbeaten in nine matches and host Jeonnam Dragons, who sit sixth in the table.

At the other end of the standings, bottom-placed Busan I'Park could climb to ninth with victory against Jeju United.

Busan's form has improved, losing just two of their last seven matches, but of that run, four have been draws.

Elsewhere, the third-placed Pohang Steelers will look to end a four-match winless run against Incheon United.

Second-bottom Sangju Sangmu host Seoul and Gyeongnam take on Seongnam in other matches.