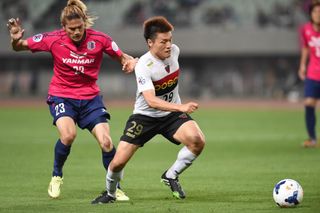 Kim Bong-Gil's men remain bottom of the top flight but gave their hopes of moving up the league a shot in the arm as they beat fellow strugglers Seoul to close the gap between them to two points.

Da Rosa struck two minutes after the break to score Incheon's first league goal since the opening day and condemn Seoul to a sixth defeat of the campaign.

At the top, leaders Pohang Steelers suffered a surprise defeat as they were beaten 3-1 by Seongnam.

In what was far from ideal preparation for their AFC Champions League last-16 tie against Jeonbuk Motors on Tuesday, two late goals did for the visitors at the Seongnam Tancheon Sports Complex.

Bae Seul-Gi cancelled out Server Djeparov's opener only for Jung Sun-Ho and Kim Tae-Hwan to find the net in the final 14 minutes.

Jeonbuk too will contest Tuesday's ACL fixture off the back of a defeat as Ko Cha-Won's 50th-minute winner saw them slip to defeat, with Jeonnam Dragons able to take advantage with a thrilling 4-3 victory over Sangju Sangmu.

The Dragons looked to be home and dry after goals from Lee Jong-Ho, Bang Dae-Jong and Lee Hyun-Seung cancelled out Yoo Ji-Hun's opener.

However, the visitors pulled it back to 3-3 before the hour mark only for Song Chang-Ho to clinch the winner with his first league goal of the campaign.

There was late drama too in the draw between Busan I'Park and Gyeongnam as Lee Jae-An and Song Su-Young scored in the final 22 minutes to rescue a point for the visitors - who had been two down at the break.

Had Busan held on for the win, they would have been within a point of Ulsan and the final Championship Round berth as Cho Min-Kook's side could only muster a 1-1 draw at home against Jeju United.