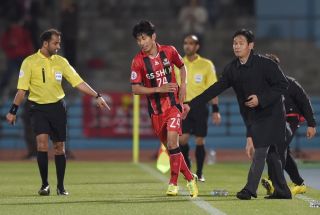 A run of four straight wins had seen Jeonbuk move four points clear at the top of the table, but they slipped up this weekend as Yun Il-lok's injury-time winner gave Seoul a 2-1 success at the Jeonju World Cup Stadium.

Lee Dong-gook appeared to have rescued a point for Jeonbuk when he equalised Yun's opener just after the hour, but Yun had other ideas as he condemned the hosts to their first home defeat in the top flight since March.

However, second-placed Pohang missed the chance to close the gap on their rivals as they were held to a 0-0 draw by basement club Gyeongnam, who have now collected four points from their two games following the departure of coach Lee Cha-man.

Elsewhere in the K-League, Ko Chang-hyeon netted twice as Ulsan beat Sangju Sangmu 3-0 and Incheon United played out a 0-0 stalemate with Jeju United.