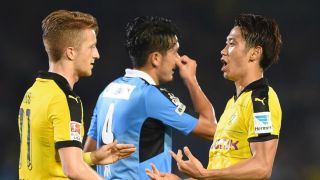 Shinji Kagawa thrilled the home crowd as he scored twice in Borussia Dortmund's 6-0 friendly victory over J-League side Kawasaki Frontale.

In front of a packed crowd at the Kawasaki Todoroki Stadium, the Japan star found the net twice in the first half before Pierre-Emerick Aubameyang matched him after the break to make it two wins from two friendlies for new boss Thomas Tuchel.

Kagawa opened the scoring within five minutes, the playmaker drifting in front of his marker in the six-yard box to guide home Lukasz Piszczek's right-wing cross.

The 26-year-old doubled his tally after 36 minutes as a piercing run from Marco Reus created an opening before Kagawa nonchalantly flicked home from 12 yards.

The introduction of Aubameyang after the break immediately paid dividends for the visitors, the Gabon international collecting a deflected pass from Ilkay Gundogan before lifting the ball into the net.

Two minutes later Kawasaki had a goal disallowed, and to add to their frustration Dortmund made it three soon after as Aubameyang glanced Marcel Schmelzer's delivery in.

Japanese youngster Mitsuru Maruoka made it four for Dortmund after an audacious flick from Aubameyang, before the latter set up Jon Stankovic to complete the rout.