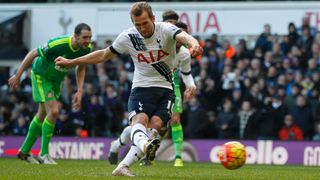 Kane scored twice in Spurs' 3-0 win at Norwich City on Tuesday to take his Premier League tally to 15 for the season, while Vardy is on 18 after a double - including a stunning volley - in the 2-0 victory over Liverpool.

Aguero has scored 13 in just 17 league appearances and finished as the division's top scorer last term, yet Pochettino says the English duo's form makes them as valuable as City's attacking star.

"Vardy and Kane show the same big qualities as Aguero," he told the media on Thursday. "They are all different and come from different circumstances, but today if we speak about Vardy and Kane, they are on the same level as Aguero."

Spurs moved above Arsenal in the table after the Gunners were held to a 0-0 draw by Southampton but Pochettino says his motivation for this season goes beyond outstripping their London rivals.

"I can feel it is very important for our people, who love Tottenham, to be above Arsenal," he said. "The reality is that they are our 'sport' enemies, you can feel that.

"But it is not my principal motivation. It's important for me to take care of our goals and our objectives, without thinking too much about the opposition. We are the most important people and we need to stick to our ways. It's not important what the others do."

Pochettino went on to reveal that midfielder Dele Alli is set for tests after he complained of dizziness during the win at Carrow Road, though he expects him to be available to face Watford on Saturday.

"We don't know why he was dizzy. We need to do some tests next week but we have very good medical staff," he added.

"We are not worried, we just need to assess him and to know why, but we are sure it is not a big problem.

"We need to have some checks and we need to look again but all seems to be normal and we hope he will be available for Saturday."