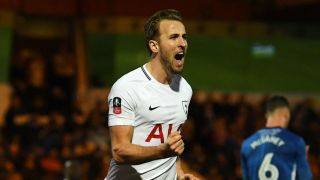 Tottenham star Harry Kane could walk into any team in Europe, according to Brazil great Ronaldinho.

Kane has enjoyed another prolific season at Spurs, scoring 35 goals in all competitions to mark the third campaign in four when he has netted at least 30.

The England international is linked to the likes of Real Madrid and Ronaldinho believes the 24-year-old is more than capable of playing for any of the world's biggest clubs.

"Harry Kane has been a great player for a while now – but there is no doubt this season he has hit a new level," he told the Mirror.

"He is now at the level where any team in the world would want him. He could walk into any team in Europe.

"Barcelona, Real Madrid, Manchester City, it doesn't matter how strong the team, he is now one of those few players in the world that any team would have to make room for if they had the chance to sign him."

A crucial winner and another Man of the Match award for . February 26, 2018

Kane has won the past two Premier League Golden Boots and is on track to make it three this season.

While Spurs will want to keep Kane, Ronaldinho – a two-time FIFA World Player of the Year – said clubs had shown they would pay whatever was needed to sign the world's best.

"Over the last windows we have seen that the biggest clubs in Europe have paid whatever fees needed to sign the best players in the world," he said.

"For maybe four or five clubs they are now at a stage where the fee is not important if they want the player, they pay what they have to."