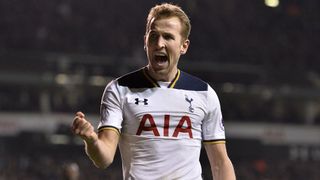 Harry Kane will not be fazed by comparisons to Alan Shearer and has what it takes to overhaul the former England striker's record Premier League goals tally, according to Tottenham legend Gary Mabbutt.

Shearer scored 260 times in the Premier League for Blackburn Rovers and Newcastle United across a 14-year spell and is way ahead of Wayne Rooney, second on the list with 195.

Kane's hat-trick in Sunday's 4-0 rout of Stoke City took him to 66 goals from 107 outings and prompted Mauricio Pochettino to describe him as "one of the top strikers in the world".

At just 23, it has been suggested that Kane could surpass Shearer's remarkable total and Mabbutt - who made more than 600 appearances in his 16 years at White Hart Lane - believes Kane has the mentality to secure himself a slice of Premier League history.

Another special day at the lane! Team was fantastic again! 4 goals and another clean sheet ! Happy with the  February 26, 2017

"Alan was a fantastic striker and obviously scored a phenomenal amount of goals but certainly I think Harry Kane can match him for that," Mabbutt, speaking ahead of the London Football Awards, told Omnisport.

"It's possible but I hate putting pressure on players or every time they score a few goals, suddenly they're chasing this target. I don't think it will faze Harry too much, he goes out there and he performs week in, week out in the manner that he does.

"I've played against some of the best strikers in the world and I would certainly say that Harry Kane is up there amongst them.

"I've seen him in training as a young player coming through and he's one of the best finishers I've seen for a long, long time. He's a great lad, level-headed, handles himself well.

"He works hard in training and obviously in matches and gets himself in positions to take advantage. He's got the potential to be one of the greatest ever English strikers.

"He's very, very hard working in games, any games where he's not scoring he's certainly bringing a lot to the team in his work-rate and his positioning and everything.

"All-round it won't faze him that he's being compared to some of the names mentioned, Harry is very level-headed. He's a great lad."

Gary Mabbutt MBE was speaking ahead of the London Football Awards, March 2 – londonfootballawards.org. Raising funds for Willow, the only national charity providing Special Days for seriously ill 16 to 40 year olds.