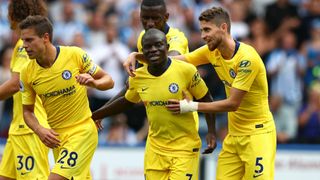 An emboldened N'Golo Kante is confident he can adapt to a more attacking role in Chelsea's transformed playing style.

The France star volleyed in the opener to help new boss Maurizio Sarri commence his debut Premier League season with a 3-0 win at Huddersfield Town on Saturday.

It was only the 27-year-old's third goal in England's top flight as he adjusted seamlessly from defensive-minded anchor to influential box-to-box contributor.

Kante has been mentally preparing for the switch since pre-season and believes his game will improve as a result.

"Now the system is ­something ­different, especially the way we play now," Kante told the Mirror.

"So, even during the ­holidays, we were thinking and talking about how to adapt. It will require a lot of sacrifice from us all, so that is why I have to continue ­moving forward as a player.

"I have worked with ­different managers in the past and different systems.

"The best way to always keep your position [in the team] is to ­remain focused and have the same attitude towards ­everyone. So that is what I am going to try to do again this season."

Kante has returned to club duty on a high from his World Cup success with France.

The former Leicester City man, who played every match in Russia, says the privilege of representing his country is "worth more than money can ever buy" and it remains a motivation for him to perform at club level.

"To represent one's own country is one of the biggest achievements a ­footballer can get," he said.

"To win the World Cup in our colours was beyond my dreams and something I will never, ever forget.

"To be able to be part of that group will stay with us until the end of our lives ­because we know what ­winning the World Cup means to us."