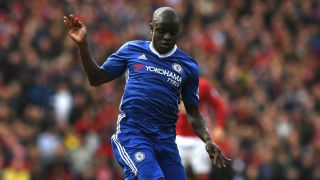 N'Golo Kante is the finest example of a defensive midfielder in world football, according to Gus Poyet.

The Chelsea star is on course to earn another Premier League winner's medal after playing a key role in Leicester City's remarkable triumph last season, with Antonio Conte's side one victory away from securing the crown.

He has been sweeping up the personal honours, too, having won the PFA Players' Player of the Year and been named the 2017 Footballer of the Year by the Football Writers' Association on Tuesday.

Poyet, who played for the Blues between 1997 and 2001, described the France midfielder as his "number one" and a player that could grace any team.

"Kante is the kind of player that all managers love to have, but that is not easy to find," the Uruguayan, now in charge of Shanghai Shenhua, told Omnisport.

"He's not just a defensive midfielder, he covers, he plays the ball when he has to play, he makes the pace of the game go [in a way that] is better for the team.

"He was maybe a player that, if you look at the other side, Leicester missed a lot during the season. Some people think one player cannot make that difference, but Kante can.

"There are positions on the pitch, depending on the system, that you need someone very, very special and he's a very special player. I hope Chelsea can keep him for many, many years."

And Poyet believes the 26-year-old is the best performing player in his position at present, eclipsing the likes of Sergio Busquets, Xabi Alonso and Daniele De Rossi.

"If you go to the best places in the world, to Spain or to England, and you look at how the best teams are performing, with a lot of respect to Real Madrid or Barcelona players, I think it's probably Kante now," he added. "I will pick him as my number one.

"If I had the money to buy one defensive midfielder, it would definitely buy him."