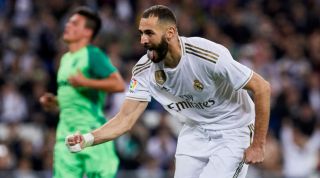 The 31-year-old scored a penalty and set up two more goals in a 5-0 rout at the Bernabeu in La Liga.

And, as RMC Sport highlights, it also saw the striker make some history.

Benzema’s goal was his 229th for the Merengues and saw him pull clear of Arsenal legend Henry as the French striker with the most goals for a single club outside of their home country.

Henry found the net 228 times for the Gunners over eight years, winning two Premier League titles and two FA Cups in the process.

Benzema, meanwhile, is now in his 10th consecutive season at Real Madrid and continues to be a major player for the Spanish giants.

The striker has already found the net seven times in nine league appearances this season, after scoring 30 goals in all competitions last term.

His tally in 2019/20 puts him joint-top of the La Liga scoring charts alongside Lorenzo Moron of Real Betis and Villarreal’s Gerard Moreno.

Real boss Zinedine Zidane praised Benzema for his contribution to the team effort, as well as his eye for goal.

“I think he's getting the recognition," he said.

"You have to show it on a regular basis and he's always doing that well beyond his goal scoring, which is important for him as the Madrid number nine.

"What I like about Benzema is how he links up with his teammates. The three up top playing together today, it wasn't like there was one stuck out on the touchline, there was constant movement and in the end, Karim is no surprise to me, he gets the recognition of a lot of people here."

QUIZ! Can you name these 50 football players by their nicknames?