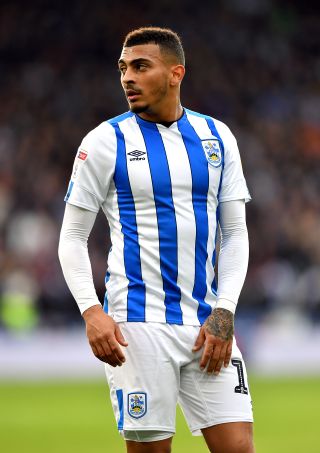 West Brom boss Slaven Bilic confirmed Huddersfield’s Karlan Grant and Leicester’s Islam Slimani are on the club’s radar as the Baggies look to boost their attack.

Forward Grant, who has not been included in Huddersfield’s matchday squads so far this term, scored 19 Championship goals for the club last season, while Foxes striker Slimani netted nine times while on loan at Monaco.

Both players have been linked with West Brom, and when the names were put to Bilic ahead of Sunday’s Premier League trip to Southampton, he said: “I’m respectful to the clubs and I’m respectful to my players here.

“But the rumours are true, they are two that are on our list. Very quality players of course.”

While there is a transfer deadline for Premier League clubs on Monday, they can continue to do business with EFL sides up to October 16.

Bilic has expressed his confidence with regard to the pursuit of fresh attacking options that “one will happen”.

The Croatian said: “We are trying to get one player, or at least one or a couple, but one basically – one will happen, and two would be good. We are totally concentrated on the striker position and I’m expecting that to happen.

“We need it. It will be crucial for us. We have good strikers, but we have to improve in that area. It’s crucial we get one quality guy that is going to give us something we don’t have at the moment.”

Another name put to Bilic was Metz forward Habib Diallo, and the Baggies head coach said: “There are rumours in the papers, but we have two or three genuine ones that we would love them to happen, and I’m quite positive.

“We know the names and we know those players want to come, and I’m expecting us to finish that.”

Promoted Albion – who have started their top-flight campaign with a 3-0 loss to Leicester, 5-2 defeat at Everton and 3-3 draw with Chelsea – have signed three players permanently that they had on loan last term in Matheus Pereira, Grady Diangana and Callum Robinson.

Filip Krovinovic has returned for a second season-long loan from Benfica, while Conor Gallagher, on loan from Chelsea, Branislav Ivanovic, Cedric Kipre and David Button have also been brought in.

Bilic added: “Still we didn’t sign ‘senators’ that every club that wants to be a serious competitor in the Premier League needs. Hopefully we are going to do it.”

West Brom were 3-0 up at half-time against Chelsea last Saturday before the visitors mounted a fightback capped in stoppage time by Tammy Abraham’s equaliser.

The ball struck Kai Havertz’s arm in the build-up, and while Bilic said afterwards it had been a handball, Abraham’s effort survived a VAR review on the basis the Germany international’s intervention had not led directly to the goal.

The handball law has been in the spotlight after a number of top-flight incidents last weekend that resulted in penalties.

Bilic was asked what he thought of the suggestion that what players were being asked to do in such situations could lead to injury, and the former defender said: “Maybe it can cause injuries if you go to extremes. Like when the kids are running around the house, we tell them ‘take your hands out of your pockets’.

“It’s a good point, but what is definite is that it is stopping them from defending in a proper way, because you can’t run with your hands tied behind your back.

“To be fair I’m a bit fed up because there is so many talking about it, and there will be again, rules and explanation of the rules. It is one that is really putting you off not only the subject but off the game.”