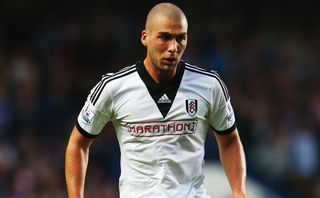 Jol's men sit 17th in the Premier League after taking just two wins from from their first seven games.

Fulham's poor performances have seen Jol come in for criticism, which Kasami feels is unmerited.

"I understand the frustration from the fans, but the manager doesn't deserve (the stick)," he told The Fulham Chronicle.

"He's got great experience and he's coached at some top clubs. He gave me a lot of confidence and I've tried to repay him with my performances."

Kasami has made eight appearances for Fulham in all competitions this term, and secured a place in the Switzerland squad for their FIFA World Cup qualifiers with Albania and Slovenia on the back of his strong individual start.

Switzerland will qualify for the World Cup with a win over Albania on Friday and Kasami is eyeing a call-up for the tournament in Brazil.

"I'm one of the youngest in the team and I try to show every week what I can do," Kasami added.

"I'm very pleased with this season because I've been playing a lot and showed a lot of people that I can be an important player for Fulham.

"I'm the captain of the Under-21s but the first-team coach told me I'm a very important player once they qualify for the World Cup.

"For now my job is to do well at Fulham and the rest will come."