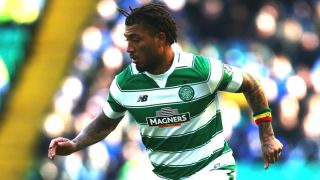 Colin Kazim-Richards and his journey across the world continues after the well-travelled forward swapped Scottish champions Celtic for Coritiba.

Kazim-Richards has signed a contract with the Brazilian side until the end of 2017, his 12th club in 12 years.

The 29-year-old, who has already started training with his new team, had only joined Celtic on a two-year deal in January, but managed just two goals in 13 appearances in all competitions in Glasgow.

"Celtic FC can confirm that Colin Kazim-Richards has left the club and will be joining Coritiba," Celtic said in a statement.

"Everyone at the club wishes Colin the very best for the future."

Kazim-Richards will wear the number 10 shirt for Coritiba, who have not won Serie A since 1985.

After six matches in 2016, Coritiba are second-bottom in the standings with one win and four defeats.

"I knew a lot about Coritiba, I know the fans are passionate and vibrant," Kazim-Richards said via the official website.

"I did not know Curitiba [the city] and was impressed with the little I saw. I like the city, the restaurants and everything else."