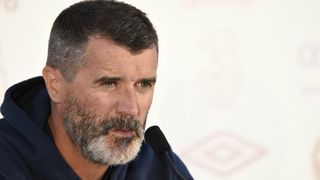 Roy Keane has waded into the war of words between Everton boss Ronald Koeman and Martin O'Neill over the Republic of Ireland's selection of James McCarthy.

O'Neill had called up the midfielder for Saturday's World Cup qualifier with Austria despite McCarthy struggling with a hamstring problem, much to the ire of Koeman.

His inclusion came a month after Koeman accused O'Neill of "killing" the 25-year-old during the last international break.

After being advised to skip international duty by his club manager, McCarthy officially withdrew from the Ireland squad on Monday, a decision that has annoyed Irish assistant Keane.

"We're disappointed that James is not here, but we knew he was struggling. He missed the last few games for his club and missed some training so he wasn't fit to report.

"As I said, we're disappointed he didn't make it, but we will survive. We've never taken any unnecessary risks with players."

Keane then rounded on Everton, questioning why Ireland have so many problems with the Merseyside club.

"I'm not sure when the last time they [Everton] have won a trophy, I think it was a good number of years ago, but maybe overloading players and players playing lots of games is a good thing," he added.

"That means your club is being successful and lads are playing week in, week out, playing mid-week games, but Everton don't play any European football. I think they're out of the League Cup as well.

"I think Norwich beat them at Goodison [Park], but maybe Everton as a club, and it's a brilliant football club, maybe their players need to toughen up a little bit.

"Clubs are going to be selfish, they're going to want to look after their own players. We've had a bit of a problem previously with [Roberto] Martinez, I think he was slightly over the top.

"And this is not criticism of the Everton players; it's more from Everton and their staff. They were always carrying knocks and I always felt that Everton players were going to turn up on crutches or crawling through a hotel door, and it looks like we're probably going to have that issue again with Koeman."