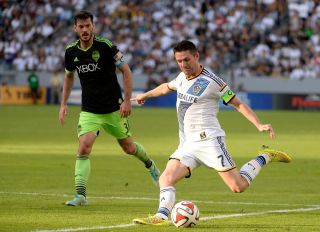 The 34-year-old Republic of Ireland international has been in dazzling form for the Galaxy, who will face the Revolution in Sunday's MLS Cup final at StubHub Center in Los Angeles, scoring a career-high 19 MLS goals and 14 assists as Bruce Arena's men finished second in the Western Conference.

Keane, who move to Los Angeles in 2011, is the third Galaxy player to be named MVP of the competition, following in the footsteps of Carlos Ruiz (2002) and Landon Donovan (2009).

United conceded the joint lowest number of goals, 37, as they topped the standings in the Eastern Conference.

Vancouver Whitecaps midfielder Pedro Morales took out the Newcomer of the Year award.