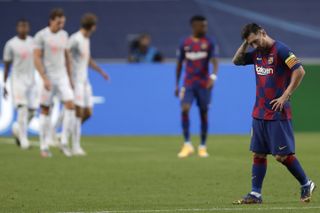 Quique Setien has left his role as Barcelona first-team coach, with a replacement set to be confirmed in the coming days.

The 61-year-old, who only replaced Ernesto Valverde in January and signed a contract to take him through to the summer of 2022, has departed after Friday’s humiliating 8-2 loss to Bayern Munich in the Champions League quarter-finals.

Netherlands boss Ronald Koeman, a former Barcelona player, is reportedly the favourite to take over at the Nou Camp but it seems whoever lands the role has a big job on their hands.

Here, the PA news agency takes a look at the key issues the new man will have to address.

Settling the future of the club’s star player will be the new manager’s first and most important task. The six-time Ballon d’Or winner is out of contract next summer and has been making noises of discontent for much of 2020. Messi openly criticised technical director Eric Abidal in February and took aim at the board the following month after they agreed to a 70 per cent pay cut for the playing squad. He called Barcelona a “weak team” after their LaLiga title defence was ended by a home defeat to Osasuna last month and the embarrassing defeat to Bayern has prompted reports in South America that the 33-year-old wants to leave and end his 19-year association with the club.

While keeping Messi is paramount, freshening up an ageing team is just as important for the new manager. No silverware for the first time since the 2007-08 season could see a summer clear-out and some of the club’s biggest names may leave. Following the Bayern defeat, Gerard Pique said “nobody is safe” and the 33-year-old is right. The centre-back, along with fellow defender Jordi Alba, 31, midfielders Sergio Busquets, 32, Arturo Vidal, 33, and Ivan Rakitic, 32, and striker Luis Suarez, 33, are all in the twilight of their careers and some younger, fresh blood may be brought in.

One such way the new boss could breathe new life to the team is by making more use of their famed academy. Neither Setien nor his predecessor Ernesto Valverde dared enough to give more minutes to the likes of Ansu Fati and Riqui Puig, with the 21-year-old midfielder not even making an appearance in the Champions League this season. Setien this month blocked the pair from playing for the B side so they could focus on the first team and the Champions League tie against Napoli. Barcelona B lost that game against Sabadell, costing them promotion to the Segunda Division. The new manager should make sure both starlets are well integrated into the Barcelona first team with other prospects such as Carles Alena, Francisco Trincao and Alex Collado possibly following suit.