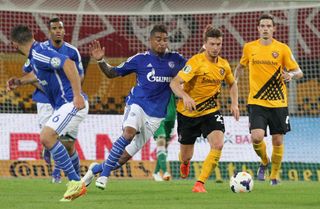 Keller's men were a first-round casualty at the hands of third-tier club Dynamo Dresden, losing 2-1 at the Glucksgas Stadion on Monday.

Schalke, who finished third in Germany's top flight last season, were punished for defensive lapses in 24th and 49th minutes as Dresden took control of proceedings.

Justin Eilers stepped up and broke the deadlock from the penalty spot before team-mate Nils Teixeira doubled the home side's lead four minutes into the second half.

Joel Matip pulled a goal back for Schalke with 12 minutes remaining but it mattered little as the five-time champions exited the competition, much to the disappointment of Keller ahead of Saturday's Bundesliga opener at Hannover 96.

"Many players have not come to their power, we had five or six total failures," Kelly told Sky.

"We have to process and analyse some things. This is a huge disappointment today. We played much too slowly and were not powerful enough."

While it was a night to forget for Schalke, it was a successful outing for Dresden, who made a triumphant return to the DFB-Pokal.

Dresden missed the 2013-14 DFB-Pokal campaign for persistent crowd trouble, which came to a head when their supporters set off flares and caused damaged in a second-round clash against Hannover the season prior.

But Dresden marked their return to the cup competition with a shock win.

"The players deserve it, to be celebrated. You should enjoy this moment," Dresden coach Stefan Boger said post-game.