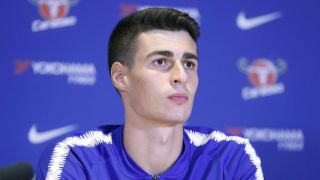 Chelsea fans should not expect Kepa Arrizabalaga to be at the level of Thibaut Courtois straightaway, says Blues boss Maurizio Sarri.

Kepa completed a world-record £71.6million switch from Athletic Bilbao on Thursday as a replacement for Courtois, who joined Real Madrid.

The 23-year-old penned a seven-year deal at Stamford Bridge and is regarded as one of the most promising goalkeepers in world football.

However, Sarri has looked to lower the expectations on his new signing by insisting Kepa - who could make his debut against Huddersfield Town on Saturday - still has a lot of improving to do before he can reach the level of Courtois.

"Not at the moment," he said when asked if he can be as good as Chelsea's former keeper.

Sarri: 'He is very young, 23. I hope he can improve very fast but for the moment he is not Courtois, of course. Kovacic is very technical and [can] play between the lines of the opponent. For us, that could be very important.' August 10, 2018

"So I hope he can improve very fast. But for the moment he is not Courtois, of course.

Mateo Kovacic has arrived at Stamford Bridge on loan from Madrid and Sarri believes the Croatia international can provide his side with something different.

"I think he has the characteristics for us," he said. "Kovacic is a very technical player.

"He is able to play between the lines of the opponent, for us that could be very important."