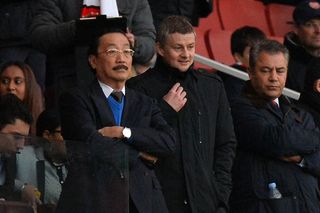 Prospective boss Ole Gunnar Solskjaer looked on from the Emirates Stadium directors' box alongside Cardiff owner Vincent Tan as they manfully repelled Arsenal until substitute Nicklas Bendtner smashed home from close range to break the deadlock in the 88th minute.

Theo Walcott produced a crisp, chipped finish to make sure of the points in stoppage time as the visitors were left with nothing to show for an impressive performance at the end of a turbulent fortnight during which boss Malky Mackay was publicly removed from his position.

"Probably that will be my last game in charge," Kerslake told Sky Sports, before confirming that he will still go into work on Thursday to help Cardiff with their preparations for the weekend's FA Cup third-round trip to Newcastle.

"I'm contracted to the club until the owner or the chairman tell me differently.

"Coaches and managers in football, we know it's a perilous job and we just get on with it."

The presence of Solsksjaer might have played a part in inspiring a fine Cardiff display but Kerslake was unsure as to whether this was a factor, claiming his charges were only focused on the task in hand before kick-off.

"I'm really unsure whether they knew or not. There was no talk of it on the team bus, at the hotel or in the dressing room, so I wouldn't be totally sure," he explained.

Solskjaer's capacity to spend during the January transfer window is likely to be monitored closely, as Cardiff's transfer budget marked a key battleground in the struggle between Tan and Mackay.

Regardless of whether new faces arrive, Kerslake believes Wednesday's performance demonstrated the new man has more than enough at his disposal to secure Cardiff's top-flight status from a position of fourth bottom and one point above the drop zone.

"We knew coming here they've got wonderful players and we knew we were going to be put under the cosh," he said.

"But you saw the discipline of the side and the way they defended for each other. I thought we were going to hang on.

"I believe the squad that we have is good enough to survive the Premier League. Whoever comes in, the new guy, obviously has an important month coming up.

"If he can add to it, if he can make the squad better then all well and good but I believe the team are good enough to stay in the Premier League."