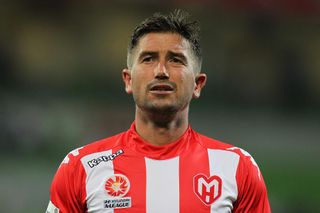 The 35-year-old Australian returned to his homeland this season to play with Melbourne Heart in the A-League in a last-ditch attempt to go to this year's World Cup finals in Brazil.

But, as it has regularly done throughout his career, Kewell's body failed him with the veteran missing nine games of the 2013/14 campaign so far with a combination of injuries, while Heart's dreadful season (just six wins in 24 matches) did not aid his cause.

Kewell, who was voted Australia's greatest player ever in 2012, made his professional debut with Leeds United in 1996 at the age of 17.

The scintillating winger was named the English PFA's Young Player of the Year in the 1999/00 season as he helped Leeds to third in the Premier League with 10 goals and 13 assists.

At the end of the 2002/03 season, Kewell moved to the club he supported as a kid - Liverpool - but never cemented a position at Anfield due to a myriad of injuries.

Despite this, Kewell will certainly retire as one of Australia's best football exports, while he also played a key role in ending his country's 32-year drought from the World Cup.

Kewell, somewhat fortuitously, set up Mark Bresciano's goal in the second leg of a World Cup play-off against Uruguay in 2005, which the Socceroos eventually won on penalties after the tie finished 1-1 on aggregate.

At the World Cup in Germany in 2006, Kewell also scored the crucial equaliser in Australia's final group match against Croatia, which sent the Socceroos into the knockout stages.

Kewell also went to the 2010 World Cup in South Africa, although he only played 24 minutes, as he was left out of Australia's first match and got sent off in the first half of their second.