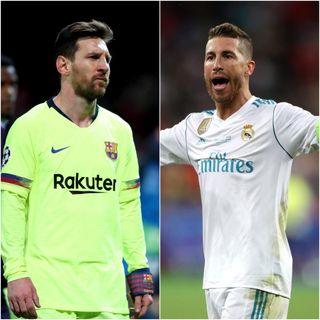 Real Madrid host Barcelona on Sunday in a clash that could go a long way to deciding who wins LaLiga.

The previous meeting in December ended in a rare goalless draw, while Barca go into the game with a two-point lead at the top of the table.

The goalkeepers responsible for the first goalless El Clasico in 17 years will face each other again. But neither go into the second league clash in top form. Courtois has not kept a clean sheet in his last four games, was beaten at his near post in last weekend’s defeat at Levante and could not keep out Gabriel Jesus’ header despite getting a hand to it in the Champions League loss to Manchester City in midweek. Ter-Stegen kept a clean sheet against Eibar last weekend but that was one of only two shutouts he has managed in the league in 2020. Whoever has the better game in goal this weekend could prove crucial.

The veterans of dozens of Clasicos will do battle once again. Messi has scored 26 goals in 40 appearances against Real and has netted three times in his last three league trips to the Bernabeu. Defender Ramos has four goals and three red cards in his 45 El Clasico appearances. He was dismissed against City in midweek and will need to remain disciplined if Real are going to stop Messi and Co on Sunday.

Modric is 14 months removed from winning the Ballon d’Or but the 34-year-old has struggled to reach those standards so far this season. Up against him this weekend is 22-year-old De Jong who is playing his first campaign for Barca. A year ago, De Jong starred against Modric in the Ajax team that ended Real’s Champions League dominance and was hailed as one of the future stars of the game. He has slotted in comfortably at the Nou Camp and Sunday gives him the opportunity to make his mark on the biggest of stages – and another chance at testing himself against Modric.

Benzema will line-up in El Clasico for the 37th time, but he has not scored in a league game against Barca since April 2016. He is scoreless in his last five games in all competitions and has managed just one league goal in 2020 – though that was the winner against city rivals Atletico Madrid on February 1. Real will hope the striker has another big goal in his locker. Looking to stop him will be Gerard Pique, providing the 33-year-old shakes off an ankle problem he suffered against Napoli in midweek. The defender’s last El Clasico league goal came in the same game as Benzema’s, but his main focus will be on stopping the Frenchman on Sunday.