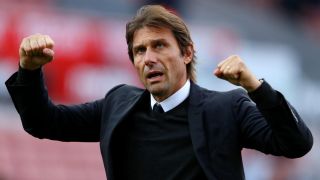 Luiz suffered a fractured wrist in last weekend's 0-0 draw with Arsenal, while Pedro picked up a minor knock in Saturday's 4-0 win over Stoke.

Hazard, meanwhile, made his first start of the season in the 5-1 EFL Cup win over Nottingham Forest on Wednesday after breaking his ankle in June.

"David is an important player for us, he is a generous player and always available," Conte said.

"This type of injury won't stop him. He is in contention for the game, no problem."

On Hazard, Conte added: "This competition is very important for him and the team as it brings you on another level. He is totally fit and in contention for the game.

"Everyone is fit. Pedro has a minor problem but not a serious problem."

Chelsea have bounced back in style from their shock opening-day Premier League defeat to Burnley - winning six of their last seven games in all competitions - and Conte admits he will be using the game at the Wanda Metropolitano as a barometer of his side's progress.

"For us it is very important to play game by game, now we play a really tough game," he said.

"It is an important game for us. You understand which your moment is and for us it is very important to play this type of game - away to one of the best teams in the Champions League. It is the best moment to understand where we are."