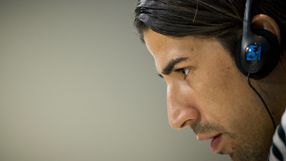 "I don't know if he will be able to play or not but I think all the others are in condition to play," coach Jose Mourinho told a news conference at the Amsterdam Arena on Tuesday without specifying the nature of his injury.

Khedira typically partners Spain international Xabi Alonso in a two-man defensive midfield and if Mourinho is deprived of the German he has the option of deploying new signings Luka Modric or Michael Essien in his place.

Nine-times European champions Real twice came from behind to triumph 3-2 in their Group D opener at home to Manchester City two weeks ago while four-times winners Ajax fell to a solitary late goal at Borussia Dortmund.

Real have beaten the Dutch side home and away in the group stage the past two seasons with an aggregate score of 12-0 but Mourinho said he believed Ajax, under coach Frank de Boer, would put up more of a fight this time.

"In my opinion they are a team better prepared to play Champions League and I think they will give us a completely different match than they gave us in previous seasons," said Mourinho who was an assistant at Barcelona when De Boer played there in 1999/2000.

"That is because they have worked with Frank for an extra season, because they replaced the players they sold with other players with very similar characteristics, because they are more adapted to the level of the Champions League.

"I think they are ready to play against us and fight for a result every match, that's just my feeling," added Mourinho.

"We need to play at the top of our ambition and concentration if we want to get a result."

Mourinho said he was unaffected by reports in Spain of a rift between him and Real's Spain centre-back Sergio Ramos and added all was well between them.

"I am not worried about it at all and it doesn't affect me at all. I do my work anyway," he said.

"Nothing distracts me from my objective which is to win a match tomorrow or try to win it or give my all if I am not able to win it.

"For me it's a game like any other and what is going on outside, what is being written, what is being commented on, does not distract me and I don't think it does the players either."

Mourinho said his relationship with Ramos was "the same as with any of the other players".

"My relationship with my wife is much better than that with Sergio Ramos, without doubt," he added.

"But my relationship with Sergio Ramos is much better than with people who I don't know, who I don't work with and share the day-to-day, with whom I don't have shared ambitions and shared responsibilities.

"There is no problem."