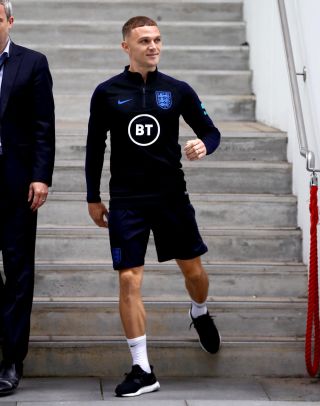 Kieran Trippier admits the second half of his final season at Tottenham was a “car crash” but felt the club did not indicate that they wanted him to stay and believes they were too hasty in selling him to Atletico Madrid.

The 28-year-old is back in the England squad for the forthcoming Euro 2020 qualifying double-header against Bulgaria and Kosovo after making an early impression in Spain.

He missed out on the Nations League finals at the end of last season as a poor personal campaign at Tottenham followed reaching the semi-final of the World Cup a year earlier.

Here it is: your #ThreeLions squad for the #EURO2020 qualifiers against Bulgaria and Kosovo!https://t.co/h7MScWmxEx— England (@England) August 29, 2019

Trippier concedes his form curtailed during the latter months of his Tottenham stint and felt the writing was on the wall in terms of having to leave the club, his last game coming in a Champions League final defeat to Liverpool.

“The whole season I had no excuses,” he said.

“My (bad) performances started after Christmas because I thought I had an okay first half of the season if I’m honest but then it was just like a car crash, it just went ‘bang’, things weren’t going my way, I wasn’t playing well.

“I heard rumours about them selling me and it’s not nice but it happens and it’s football. Football changes quickly.

It’s been great Texas, thanks for having us 👏 Now time for New York! #ny#nyc#aúpaatletipic.twitter.com/QSteCUAwbq— Kieran Trippier (@trippier2) July 24, 2019

“We all did so well at the World Cup but I didn’t have the best season after. It wasn’t an easy decision. I love the Premier League but I’m in LaLiga now and loving it.

“I set the bar high at the World Cup and they knew how well I could do but I just feel that Tottenham probably got rid of me at the wrong time because I just needed that four-week rest for recovery because I was struggling with injuries to come back, fresh, ready. So maybe I could have stayed, but I’ve got no regrets.”

After holding talks with Spurs chairman Daniel Levy and manager Mauricio Pochettino, Trippier knew his time in north London was coming to a close as he made a surprise move to Madrid in a deal worth a reported £20million.

“I spoke to my wife and I spoke to my brother who I speak to all the time, and decided to pull the manager in pre-season to see what’s going on,” he said.

“It was a difficult decision. I had four good years there. Met some good people there and thought I had a future there.

“I had a conversation with the manager, a meeting with the chairman to see what my future was and I didn’t get the impression that they wanted to keep me. It is football. It happens.

“It’s not nice when you know the club want to sell you, it’s not nice, but that’s football, it happens.

“It’s disappointing. I gave everything for the club and I wanted to stay, I had another couple of years left, but everything happens for a reason.

“Me and the manager didn’t leave on bad terms, he has done a lot for me and I respect him highly. It is just a few things, I tried to speak to the chairman I just didn’t really get an answer.”

Trippier signed a three-year deal with Atleti and has already earned his England recall, having turned to Three Lions boss Gareth Southgate for advice – before he then travelled to Spain to watch the right-back in action last weekend.

“I’m excited now and just looking to the future,” he added.

“After the season I had last season I felt like I needed a new challenge, to work for Cholo (Diego Simeone) is one of the best managers in the world, so when they came knocking, saying they were interested, to work for him, especially the defensive side which I need to improve on.

“I had a good chat with Gareth. I spoke to Gareth a lot last season about my future, personal things as well and he was always there for me which I appreciate so much.

“I spoke to Gareth about me going to Spain and he was happy and wished me the best. I spoke to a few other people as well and I took it with both hands.

“I wasn’t aware straight away (that Southgate had attended the game against Leganes) but one of the staff told me before kick off and I was like ‘s***’.

“So it was one of them where you don’t want to know. But for him to take his spare time to watch me. I’m one of those people that even if I didn’t get selected I still would have respect for him just to come out and watch me.”