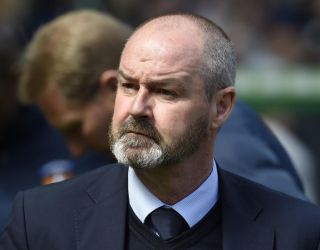 Steve Clarke has called for Kilmarnock’s supporters to provide a bumper backing at Rugby Park as the race for a Europa League place reaches its conclusion.

By his own admission, Clarke “had a little moan” at the Killie fans for a modest turnout at Celtic Park on April 27, when the Ayrshire outfit slipped to a narrow 1-0 defeat.

However, he had no such complaints on Saturday as a sold-out away allocation of 1,384 watched them beat Hearts 1-0 at Tynecastle courtesy of Stuart Findlay’s late strike.

The triumph saw Kilmarnock leapfrog Aberdeen into third spot in the Ladbrokes Premiership thanks to a superior goal difference, with home games against Hibs and Rangers to come.

Third place will guarantee Killie’s participation in Europe’s second-tier competition for the first time in 18 years.

Clarke said: “It was good to see so many fans here. I had a little moan at them last week because not so many had the belief to go to Celtic Park, where we also played very well.

“They will go home happy and I am looking forward to seeing a lot more at Rugby Park when we play Hibs.

“We keep raising the bar, which is great.”

Kilmarnock struck the post through Eamonn Brophy, Alex Bruce passed up a golden opportunity when he headed over the bar from six yards and Hearts keeper Zdenek Zlamal was in fine form to keep classy Killie at bay until the 86th minute.

And Clarke readily admits he thought the game was destined to end in a stalemate before Findlay’s intervention.

He added: “I didn’t see a goal coming. I thought it would be 0-0 but it was a great strike from Stuart – he’s got a really good finish for a centre-half.”

For Hearts boss Craig Levein, overseeing a fourth league defeat in five games, there was a sense of deja vu.

All four matches between the clubs this term have been won by the away side by a one-goal margin.

Levein said: “I could have written the script. It was exactly the same match as we have played against Kilmarnock this season. We’ve won twice down there and they’ve won twice here. And I thought there was nothing in the game at all.

“I can’t complain about the effort our players put in. We had good spells where we played some decent football.”