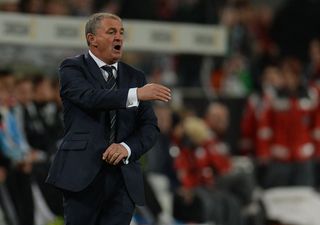 Forde made a string of fine saves in Cologne to keep the score respectable but could do little to prevent Germany sealing their qualification for the FIFA World Cup in Brazil next year.

Sami Khedira's deflected effort in the first half was added to after the break by Andre Schurrle and Mesut Ozil as Ireland's slim hopes of qualifying for the play-offs as a best runner-up were ended.

Afterwards, King praised his keeper for a fine display, which included wonderful saves from Thomas Muller, Bastian Schweinsteiger and Khedira.

"Our goalkeeper was man of the match," he said.

"We defended and we still sought out chances up front."