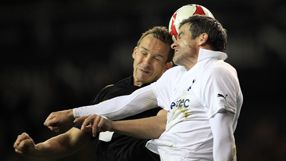 The 34-year-old New Zealand skipper, who captained his side at the 2010 World Cup, signed for Spurs at the beginning of February after having his contract cancelled by relegation-threatened Blackburn Rovers.

Nelsen had only played once this season for Blackburn prior to his mid-season switch to Spurs.

The Kiwi had suffered from a knee problem for nine months, which culminated in the end of his seven-year association with Rovers.

And King can empathise with Nelsen’s struggles over the past year, having himself been plagued with knee problems throughout his career.

"[Ryan’s] a great professional and coming straight into the team wouldn’t have been easy, because he hasn’t played too much football this season," he told the club's official website.

"He fitted in straight away, showed his quality and added a lot to the squad."

Nelsen's impressive resurgence culminated in him scoring the opening goal in the rearranged FA Cup tie with Bolton Wanderers, sending Spurs into a London derby semi-final against Chelsea at Wembley.

"He came up with a great header against Bolton and lifted a few nerves around the stadium. From there, we got the second quickly and looked comfortable," King added.

"It’s great to be going back to such a fantastic stadium and such an occasion against Chelsea.

"We know all about the club’s tradition in the FA Cup and it feels good to be going back there for another semi-final."