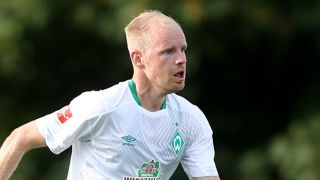 Davy Klaassen says it is "impossible" to compare him to world-class midfielders such as Xavi and Toni Kroos.

Before his passing, Dutch football legend Johan Cruyff likened compatriot Klaassen to Xavi and Kroos for his "perfect anticipation" on the pitch.

And the 25-year-old does not feel he deserves to be compared to Barcelona icon Xavi and Real Madrid star Kroos.

Klaassen toiled in the Premier League after Everton signed him for a reported £23.6million from Ajax but has settled quickly into life in the Bundesliga, making 11 appearances and scoring twice in the league for Bremen.

Coach Florian Kohfeldt is considered a rising star in the game and Klaassen feels Werder's gameplan under the 36-year-old suits his style of play.

"He's really passionate about the game. He's sometimes crazy if we win or we lose, both ways," Klaassen added. "And I think he has a good eye on tactics and everything, so I think, yes, he's a good coach for us as a team.

"He was quite important for me joining the club because I've seen some matches of last season and then it made me already enthusiatic. And after the talk with him I thought this is it, I want to go to Werder because I think this is what I like to play for. And yes, that's true.

Bremen travel to Freiburg on Sunday before hosting Bayern Munich, who surprisingly sit in fifth place in the table. Klaassen believes his side can upset the reigning champions at the start of December, so long as they do not show them too much respect.

"I think we have to play our game and not adapt too much to Bayern because I think if we play our game we have a chance," he said.

"But I think Bayern is a great team and we have to have a good day to beat them. But it's not impossible."