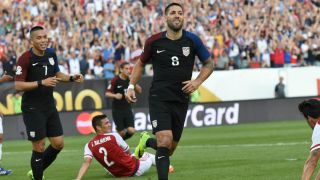 Jurgen Klinsmann says he is sick of United States being labelled underdogs and has challenged his side to chase glory on home turf at the Copa America Centenario.

Clint Dempsey's 27th minute strike was enough for USA to defeat Paraguay in Philadelphia despite DeAndre Yedlin's red card early in the second half.

That was enough for the hosts to finish top of Group A as Costa Rica defeated a much-changed Colombia side 3-2, and that could see USA avoid a tough quarter-final against Brazil who play Peru in their final group game on Sunday.

But Klinsmann insisted there can be no excuses for USA no matter who they play, and no longer wants his players to buy into the notion that they are underdogs at the tournament.

"The old story is the underdog story, and I cannot hear that story anymore," Klinsmann said.

"I want to see them risk things. Let's go for it! Because if you're not going for it, sooner or later they're going to break you down because they have class players that will give you one or two [goals]. That's the learning curve.

"The knockout stage is very mental-driven. It's [an] absolute mental game. It's when you step on the field and you see certain jerseys. It's kind of sniffing at each other and saying 'I'm ready for you.'

"This all about the moment then, and this is what they need to believe in. Whoever is on the other side, I'm ready for you. This is what you would love to see. It's kind of easy to say, but it's now it's becoming a mental learning curve, these upcoming games. This is what we hopefully improve now on."

USA could face one of three teams, with Brazil, Peru and Ecuador vying for two qualifying spots from Group B, but Klinsmann is ready for any challenge.

"If it's Brazil, it's Brazil. If it's Ecuador, it's Ecuador," the German coach added. "Ecuador we know a little bit better because we played the friendly, obviously. But you don't even need to watch Brazil. Every player you know him inside anyway, so you don't need to send a scouting staff there.

"If it's Brazil they are the big-time favourites, five-time world champions. We love them. Why not go at them? Why not be courageous? Why not put pressure on them and give them a game. This is what we're going to prepare."