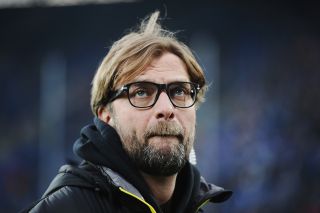 Dortmund head coach Klopp has witnessed his side slump to fourth in the Bundesliga table, 12 points adrift of Pep Guardiola's Bayern who have a game in hand.

Klopp is now focused on ensuring Dortmund return to winning ways against Augsburg at Signal Iduna Park on Saturday, and is targeting automatic qualification in Europe's premier tournament.

"The initial premise for the second half of the season is that we are fourth, trailing by many points behind Bayern Munich who also have a game in hand," he said.

"Bayern Munich isn't our aim for the moment. We are focusing on Augsburg, and then we want to pass in front of the teams that are ahead of us.

Dortmund should head into Saturday's clash with renewed confidence after winning four friendlies during their month-long break.

But Klopp is only interested in seeing how his side perform upon the resumption of league duty.

He added: "The question of whether our preparation went well can only fully be answered on Saturday which will also depend on our opponent.

"Everything that we have been able to assess, like many of you have witnessed, has been assessed.