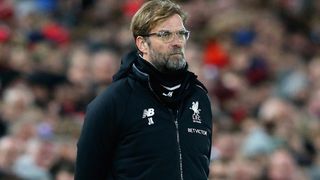 Klopp's side ended City's unbeaten start to the Premier League season with an exhilarating 4-3 win earlier this month, but have slumped to shock losses to Swansea City and West Brom, the latter seeing them knocked out of the FA Cup, since then.

But the German said there were no signs complacency had become an issue for Liverpool, who visit Huddersfield Town in the league on Tuesday.

"Nothing in training gave me a sign that the boys misjudged the success or result against Man City, or the performance," Klopp told UK newspapers.

"We are really serious people and we took it, I think, in the right way, but then we had two games and we have to show that we can do better."

Liverpool are still in a top-four fight, sitting two points clear of fifth-placed Tottenham with 14 games left this season.

Klopp called on his team to respond to back-to-back losses, saying they were under pressure to bounce back.

"There are a lot of games to play, a lot of big challenges waiting for us and we have to be ready," he said.

"Of course the pressure increases in a situation like this, the pressure we make on ourselves, but that's how it is."