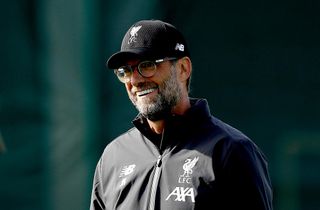 Jurgen Klopp played down suggestions Liverpool’s Champions League triumph last season makes them the best team in Europe as he revealed he wants to “create more stories to remember in the future”.

The Reds made up for missing out on the Premier League title by one point to Manchester City by clinching the most coveted prize in European club football by beating Tottenham in the Madrid final in June.

Klopp, though, insists Liverpool cannot dwell on their success as they prepare to begin the defence of their crown against Napoli in their Group E opener.

He said: “We cannot be the best team in Europe because Man City is the best team in the world, that’s the same planet, I heard! There are a lot of good teams out there and you have to prove that constantly.

“You cannot imagine how normal it is to carry on after the celebrations, it’s so easy to carry on normal if you have the right character.

“If you go nuts and start taking drugs and drinking and driving different cars or whatever, and leave your missus at home because you are now the Champions League winner, then I can’t help you.

“But we are not like this, we want to create more stories to remember in the future and not only this one, so we cannot stick to that.

“I have no idea how I could use the fact that I won the Champions League with the boys, so I didn’t even think about it.”

Liverpool’s ascent to glory came despite losing all three fixtures away from Anfield in the group stage last year, when they were also paired with Napoli, who triumphed 1-0 in the corresponding encounter last October.

Klopp added: “We want to be as consistent as last year, but play our football from this year. It’s just ‘do your best’ all the time.

“Last year we learned from one game to the next game and we have to use that experience because if you don’t defend with all we have then we have no chance against Napoli, they are so strong.

“They are stubborn in a positive way. They play football, they break lines, they have good counter-attacks, they are creative. I enjoy it when I analyse Napoli. I like to watch them.”

Captain Jordan Henderson is unconcerned that Liverpool being defending champions leaves them with a target on their back.

The England midfielder said: “Maybe, but I feel as though being at Liverpool everybody wants to beat you anyway.

“It’s the same for us, we want to beat everyone we play. For us it’s the same it always has been, give everything in every game we play.

“We are always hungry for more and always want to improve and feel we can do better.

“Last season was last season. We can take experience from the campaign and, if we can take that into this campaign, ultimately we feel we can still do a lot of things better and everything is possible again.

“Napoli will be tough, they are a great side, but we just have to concentrate on what we do. If we perform to the level we can then we have a good opportunity to win the game.”