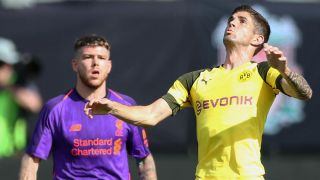 United States international Pulisic scored a brace as Dortmund came from behind to beat Liverpool 3-1 at the Bank of America Stadium in Charlotte on Sunday.

Klopp opened the door on a possible transfer for the 19-year-old during his pre-game news conference, admitting his admiration for the Dortmund star.

Speaking to reporters after Pulisic's display, Klopp said: "I didn't see anything new, just that he's a bit older and has new tattoos!

"He's a fantastic skilled boy, and it's not a surprise to see. He's a smart player, and unfortunately the USA needs more of these players. He alone cannot do it all.

"Don't put too much pressure on the boy, hopefully you can have a few more of them and then play very successful soccer in the future. If Belgium and Iceland can go to a World Cup then so can the USA. I think he'll be fine."

Liverpool appeared set to open their ICC campaign with victory thanks to Virjil van Dijk's 25th-minute opener, until Pulisic inspired Dortmund's comeback after the hour.

Pulisic converted a 66th-minute penalty before putting Dortmund ahead with a minute of regulation time remaining, while Jacob Bruun Larsen sealed the win in the 93rd minute.

"We have said it a few times that football is a results game, and we lost. Dortmund scored three, we scored one, that's how it is. That's the fair result," said Klopp, who is waiting to discover the extend of Joel Matip's muscle injury after he limped off the pitch in the first half.

Jürgen Klopp offers an update on Joel Matip after the centre-back limped out of today's opener after 22 minutes: July 22, 2018

"The game was obviously very difficult for both teams. You could see after five minutes a few players thought 'wow, where are we here?!' It is quite difficult with these mixed line-ups, and Dortmund had the same problem, to get this organisation. Fabinho, position-wise, should be the guy who organises things for us, but with Adam Lallana and Curtis Jones, plus two wingers, it was not too easy.

"The beginning of Dortmund was good, then we controlled things without creating chances. We scored a nice goal off a set-piece – set-pieces were probably the best thing about today for us.

"The second half we played a lot better against a different Dortmund side, our pressing was much better, Dortmund tried to play football and that helped us a little bit. We won the balls but we didn't do very good things with the balls that we won. The surprise is that we scored the goal in the first half and not the second.

"We had two big chances off the set-pieces again with Dom Solanke and Joe Gomez, and we had a chance with Ojo. Daniel was in a few good positions too, and I liked the football that we played there. Then we had a drinks break without drinking, deep in our own half, around our box lost the ball, lost it again and it's a penalty. We don't like it but it can happen, it's easy to explain.

"On a day like this you have to stay strong and show desire, greed to keep going. But then Dortmund scored a second and then a third. It was too much. We have to learn off it and go again. That's it."