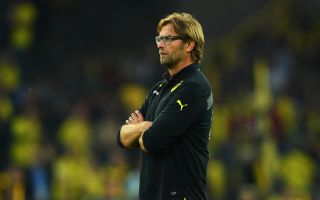 Dortmund had 16 shots on target in their home game on Friday but only managed to convert one of those, with Robert Lewandowski tapping in a cross from Marco Reus in the 55th minute.

Klopp had said in the lead-up to the Bremen clash that his team were struggling in the front third and although Dortmund highlighted that issue again at Signal-Iduna Park, the 46-year-old German coach tried to remain positive.

"In the end, we had to do some work but I did not tremble," Klopp said, referring to a late flurry of chances to Bremen.

"I do not think that after nine points from three games, the profligacy is the best thing.

"The missed opportunities is an area we need to improve and in all other areas we still have room for improvement.

"But what can I complain about?

"We have brutally handled a venomous opponent for at least 80 minutes."

Lewandowski, who has been linked with a move to Bayern Munich throughout the European summer, scored his second goal of the season against Bremen and the Polish striker looks more settled with Dortmund after reportedly agreeing to play out the campaign.

Klopp was thrilled the 25-year-old was rewarded for his hard work in the forward third.

"We performed in the second half, the foot was no longer removed from the gas, the leadership was important and, of course, it did not surprise me that (Lewandowski) scored the goal," Klopp said.

The victory took Dortmund top of the Bundesliga with nine points from three matches and a goal difference of plus six.

Bayer Leverkusen (six points, plus three), Bayern Munich (six, plus three) and Mainz (six, plus two) could all potentially overhaul Dortmund before the end of the weekend.