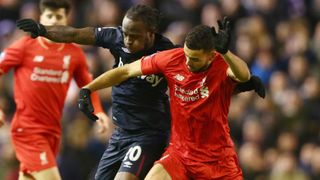 Jurgen Klopp was full of praise for his Liverpool youngsters after they forced an FA Cup fourth-round replay against fellow Premier League outfit West Ham United on Saturday.

Liverpool will face a second replay in as many FA Cup rounds after the result - adding yet another fixture to a massive three-month run - but Klopp said his youngsters should be proud of their efforts.

Kevin Stewart, Brad Smith, Cameron Brannagan and Jordan Ibe were just some of the young faces in Liverpool's starting line-up against West Ham and Klopp feels they all acquitted themselves well.

"They did really well. Kevin Stewart – five weeks ago, he was at Swindon Town and didn’t play too often. Brad Smith – a big step in the right direction. That’s really cool," he said.

"[Sheyi] Ojo came in and again did well, you could see. And Jerome Sinclair. There’s a lot of potential, that’s what we said before. That’s very important. It’s not only important to know about it; the players have to show it, but you have to show them that you see their steps.

"That’s what we tried. If they could have played as well as I trust them to, then it would have been a lot better because I know they can do better. But it was good, really good, and I’m pleased.

"These boys would have deserved to win tonight but it is like it is. We will have a team for West Ham and maybe it’s not too far away from this team today."

But Klopp said no one was guaranteed a chance in the Premier League, as the German manager insisted he would not give out league starts for the sake of giving players a run.

"They are only in our squad because they are an option for us – that’s the only reason – but we have to decide always if it is the right moment or not," he added.

"In the last few days we had 27 players in training and made two teams from that, so that’s good. It’s not the moment to talk about who will break through, they have time and that’s the best thing in life.

"They have enough pressure, you don’t have to make that pressure bigger. We will try to push them, try to help them and hopefully all of them will play sometime in the starting line-up."