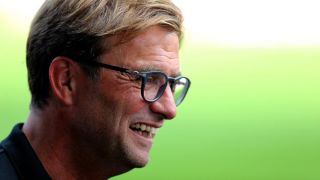 Liverpool manager Jurgen Klopp praised goalkeeper Shamal George after the teenager was brought on to play as a striker in their 2-0 friendly win against Huddersfield Town.

Klopp was prepared to play with 10 men after midfielder Lucas Leiva went down with a hamstring injury during the second half of the contest at John Smith's Stadium on Wednesday, with no outfield players left on the bench.

However, the German elected to put on backup shot-stopper George for the final 23 minutes and praised the efforts of the 18-year-old.

"I was watching the game and organising the system with 10 and then they came and said 'Come on, we have Shamal' so we changed it," Klopp told the Liverpool Echo.

"We played a strange formation with Shamal as a striker but he did wonderfully."

Goals to Marko Grujic and Alberto Moreno gave Liverpool their fourth win of the pre-season, adding to victories over Tranmere Rovers, Fleetwood Town and Wigan.

Moreno's goal came from the spot in the closing stages of the game, and the travelling Liverpool fans had urged George to take.

"Hey, even though it doesn't look like it all the time these games are quite serious," Klopp said when asked about the chants. "We don't want to make joke games.

"It is nice when the crowd calls it in but at 1-0 in no game in the world should you make a 'funny' decision. If it is 4-0 or 5-0 you can think about it but even then it is a lack of respect for the opponent.

"But everything is okay. The game was difficult. In the first half we should have scored more. We missed a penalty and had a few big chances and played some wonderful combinations so it was really good.

"But I was not too happy with the concentration level in the first 20 minutes. I said to the boys it was not bad but if we trust a little bit too much in our skills than a team performance it is not the best decision to make."