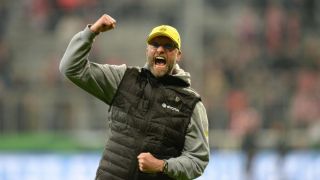 Jurgen Klopp says he will soon be "a Liverpool man" as he prepares to be announced as the new manager at Anfield.

Klopp flew from Dortmund to Liverpool on Thursday, as the Premier League club scheduled a news conference for 10am (local time) on Friday, where the German is expected to be confirmed as Brendan Rodgers' successor.

Speaking in Mainz prior to his departure, Klopp told Sky Sports News: "Yes, from tomorrow on I'm 24/7 a Liverpool man.

"But now we have to go do some private things, so no time for media. See you tomorrow."

When asked where he would be on Friday, Klopp added: "You will see, we will see."

As Klopp moves closer to the Anfield job, Liverpool confirmed on Thursday that a host of Rodgers' backroom staff had left the club.

Sean O'Driscoll, Glen Driscoll and Chris Davies have all departed, while club favourite Gary McAllister will remain in an ambassadorial position, having previously served as a first-team coach.