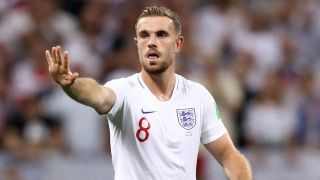 Jurgen Klopp convinced Jordan Henderson not to return early after his World Cup exploits as the midfielder looks set to sit out Liverpool's opening game of the 2018-19 Premier League season.

Henderson was an integral part of England's team in Russia, helping Gareth Southgate's side reach the semi-finals of the tournament despite being troubled by a hamstring problem in the knockout rounds.

Despite his desire to go back to work ahead of schedule, a plan Liverpool's manager dismissed, the 28-year-old will have a three-week break to recover, meaning he is not due to report for duty until August 5.

Club colleague Dejan Lovren will return the following day after playing in the World Cup final for Croatia, meaning the duo are unlikely to be involved against West Ham at Anfield on August 12.

"It was a hard fight to convince him [Henderson] that he needed a holiday," said Klopp. "I knew it would happen. On the phone, I said 'crazy'.

"Jordan needs a holiday, so that means August 5 he will be back. Dejan had a party in Croatia and played a day later [than Henderson], so he will be back on August 6.

"That would mean five days' training, after three weeks' holiday.

"I hope we are in a situation where we don't need to think about using these two [against West Ham]."

However, Trent Alexander-Arnold could be available, with Klopp having a "special agreement" with the full-back.

The teenager appeared just once for England at the World Cup and, considering his age, the Liverpool boss will consider letting him come back earlier than originally planned.

"With Trent I have a special agreement," Klopp added. "He wanted to be in earlier as well. As he's very young, I said 'Okay, have two weeks holiday and then we'll speak and see'.

"If you asked Trent he would be good to join us in two weeks. But I'm not sure I will do that. I want to have them desperately but the season is really long."