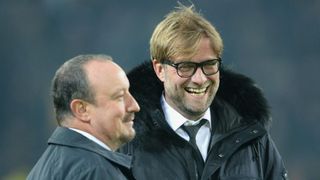 Jurgen Klopp has told Liverpool supporters to be "louder than ever" in welcoming back Rafael Benitez when Newcastle United visit Anfield in the Premier League on Saturday.

Benitez remains a firm favourite with the red half of Merseyside after guiding Liverpool to an unexpected Champions League triumph in 2005, as well as FA Cup glory a year later.

The Spaniard will return to his old stomping ground this weekend in charge of a Magpies side desperately fighting against relegation.

And Klopp, the newest dugout darling of the Liverpool faithful, does not want the crowd to disguise their affection for one of his predecessors.

"I know him. I like Rafa. He's a really successful manager and a nice person," he told a news conference. "Be louder than you have ever been - that's absolutely okay. That's how I would say hello to a good old friend.

"He still lives around here, nobody has to ignore this wonderful moment. Do how you feel."

Klopp has been impressed by the energy of Benitez's Newcastle, who earned a battling 1-1 draw at home to Manchester City on Tuesday.

"They don't look like a relegation team, but that shows how strong this league is," he said. "It's pretty difficult to change direction. Only one of them, Sunderland and Norwich can stay up.

"You need to be fit in this game. There's no doubt about it. You have seen this in the Man City game. Newcastle [were] really impressive, hot and greedy. They fight [to stay in] the league - and we have to fight back."

Having lost Divock Origi to an ankle injury for much of the run-in, Klopp was pleased to announce that another Belgium international forward, Christian Benteke, is nearing a return from a knee problem.

"[The] good news is that Christian feels good," he said. "He wants to train. We will give him a few more days. No team training yet.

"When one door shuts, another door opens."

Looking ahead to next season, Klopp claimed veteran centre-back Kolo Toure, out of contract at the end of next month, could yet remain at the club, should the 35-year-old wish to extend his stay.

"Kolo is part of my future plans," he said. "But it depends on his future. I can't give an answer because I didn't speak to Kolo about his plans."