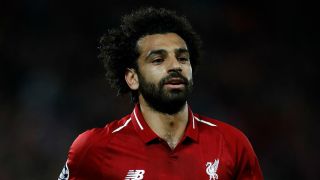 Liverpool manager Jurgen Klopp again backed Mohamed Salah, telling the forward to stay "completely relaxed" as he looks for a return to form.

Salah, 26, is yet to hit his form of last season, beginning the campaign with just three goals in eight games.

The Egypt international was substituted during the second half of Liverpool's draw with Chelsea at Stamford Bridge, where Daniel Sturridge scored a stunning late equaliser.

Speaking ahead of his team's Champions League clash against Napoli on Wednesday, Klopp said Salah needed to remain calm over his form.

"It is about your confidence. His game is really good. His last game was really good – he was in the positions but then the last two balls were not too cool. That happens," he told UK newspapers.

"The quality is there and so everything is fine."

All smiles in Napoli. Final session ahead of October 2, 2018

Despite Salah's dip in form, Liverpool are second in the Premier League and started their European campaign with a win over Paris Saint-Germain.

Salah's first season at Anfield was an impressive one, the forward netting 44 goals in 52 games.

But Klopp said it was best to judge Salah based on what Liverpool achieved in 2018-19.

"There are not big talks necessary, just a completely normal situation. If you don't score 10 goals in your first seven games then everybody asks if you can do it again," he said.

"You have to be a proper threat. As an offensive player you have to work hard. If it's 20 or whatever at the end of season it depends how much success we have as a team if it is successful or not. There is no personal success possible. All awards are for everyone. We do what we do best."