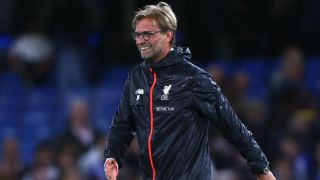 Jurgen Klopp brushed off questions about Liverpool's ability to mount a title challenge following their 2-1 victory at Chelsea on Friday, instead urging his players to prove themselves on a weekly basis.

First-half goals from Dejan Lovren and Jordan Henderson proved enough to earn victory for the visitors to Stamford Bridge - the result coming on the back of a 4-1 success for Liverpool against Premier League champions Leicester City in their previous fixture.

However, Klopp broke into a smile when he was asked if Liverpool should be considered contenders to take Leicester's crown.

"I'm really not interested in what people say," said the German. "Actually, it was the same question somebody asked me here when we won 3-1, last time here against Chelsea. It was exactly [the same], someone asked me are you challenging, or whatever, for the title. My answer was 'are you crazy?' - I remember it.

"We have 10 points and that’s fantastic - really fantastic and I am really happy about it after these difficult fixtures.

"The season is not over, we have to play football – we know we can play football and we are convinced about our quality. That's all the truth, but in the end we have to prove it every week - or in this week, every three days because on Tuesday we have the EFL Cup against Derby, which will be a nice game too."

Klopp insisted there was no reason to be concerned over the fitness of striker Daniel Sturridge, who was replaced by Divock Origi after 12 minutes of the second half.

"I couldn't see that he could sprint anymore, so that's why we had to change. We had a healthy, young striker on the bench. That's all," added Klopp. "The first half was really good - really good - from Daniel. We need this player there in the centre who we can play with and if there's a ball behind the line sometimes, so that we can go there and can push up in the last line.

"I don't think there is an injury, it is only the situation. Nobody told me about an injury, so all is good."