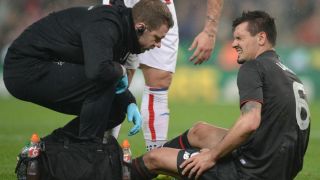 Liverpool manager Jurgen Klopp concedes he may have to dip into the transfer market in January for defensive reinforcement.

The duo join the long list of injured defenders at the club, with Martin Skrtel, Mamadou Sakho and Joe Gomez already on the sidelines.

Liverpool's injuries extend to all over the pitch, with the likes of Jordan Henderson, Danny Ings, Daniel Sturridge and Philippe Coutinho – also hurt against Stoke – all unfit.

However, Klopp said a new defender may join during the January transfer period.

"In this moment, with no centre-back fit, I think it’s a situation where you have to think about that," he said.

"Two weeks ago, we had three centre-backs, which is a good situation. When Liverpool started we had five, including Joe Gomez. Now we have nil.

"We could have waved the white flag, and said 'OK, no team against Stoke. We need this week to prepare for the game against Arsenal so play someone else against Stoke and against Exeter'.

"The problem is if all the players in this moment had no injuries in pre-season, they are still in the race and can cope with this intensity. But they had little things and had no chance to recover.

"Maybe we would have to change our training methods. I am responsible, certainly.

"The biggest problem for us is we have two and maybe three injured players again. It is very frustrating. It is a cycle that needs to come out. But it’s a big shadow over the game for us, the injuries. I don’t know how serious they are and we have to wait for this."